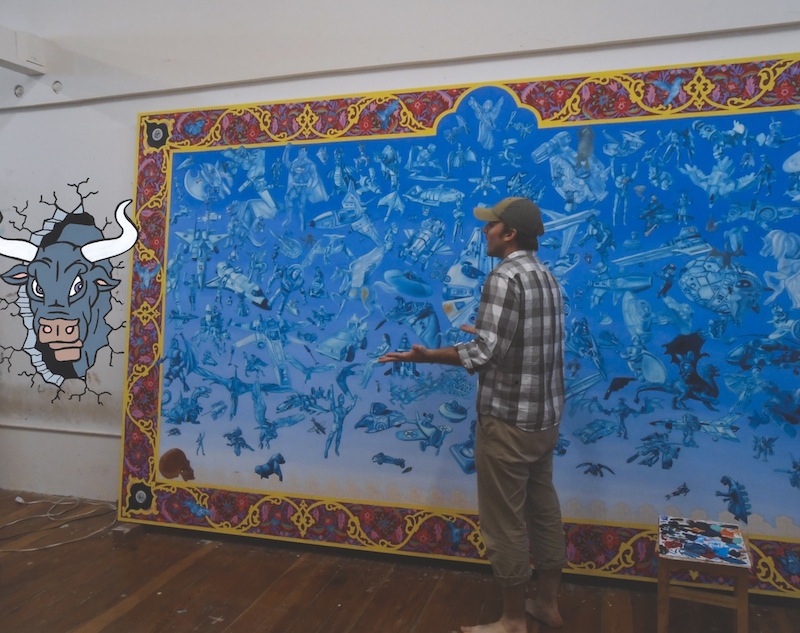 The Undeniable Charm of Auroch

ME: Just getting ready to head down to San Diego

ME: I have a booth at Comic-Con.

AUROCH: Why do you have a booth at Comic-Con? You're not funny.

ME: It's not really for comedians. It's a place for creatives to meet each other and meet some of their fans.

AUROCH: You don't have any fans.

AUROCH: Doubtful. Think anybody will buy one of your huge paintings?

AUROCH: Aren't you worried about context?

ME: What do you mean?

AUROCH: I mean, if you hang up something on the walls of the MoMA most people will believe that what they're looking at is important, right?

ME: I guess that's true.

AUROCH: But if you hang that same art on the walls of a suburban coffee shop, most people would dismiss it as amateur, don't you think?

ME: That's very cynical, but I see what you're getting at. I guess there isn't much I can do about that kind of stuff.

AUROCH: You know it's really hot in here.

ME: I think it's comfortable.

AUROCH: No, it's boiling. It's probably because you don't have a single fan. 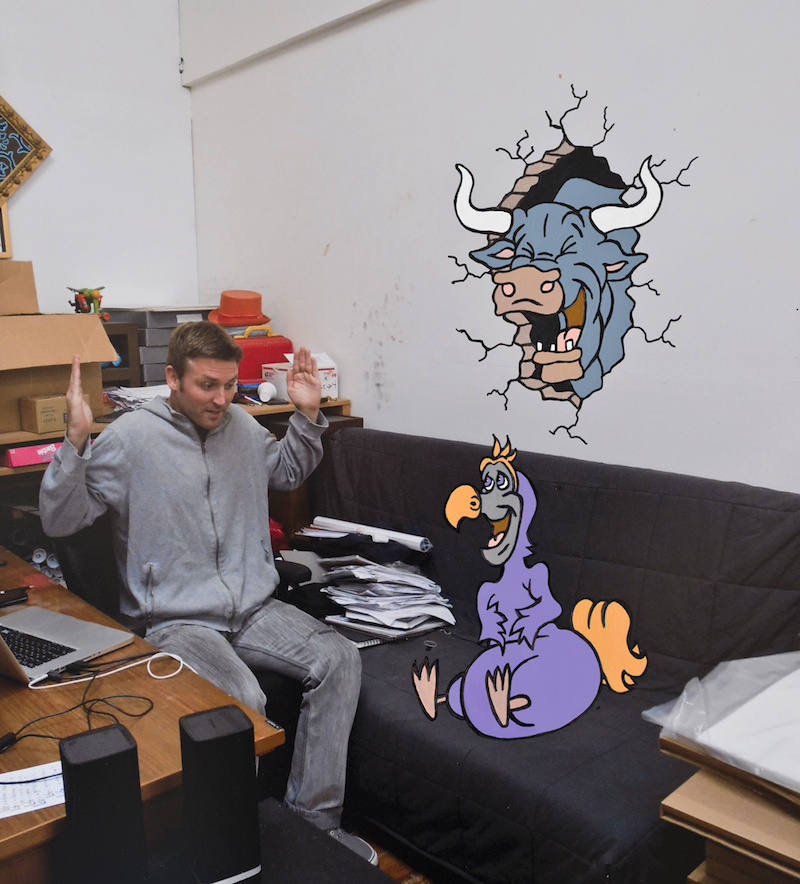 The Undeniable Honesty of Auroch

ME: So then I said to Thylo, "What are you talking about? I'm a fork with a pea on it!"

ME: That's a weird and random thing to say. Why wouldn't critics like me!?

AUROCH: Because you come across as desperate and obnoxious.

ME: What the fuck, Auroch!

DODO: Just forget about him, Robert, and keep painting.

ME: The most foul of fowl.

THYLO: A pigeon in need of religion.

ME: A verbal reek from a filthy beak.

ME: The passenger pigeons!

PASSENGER PIGEONS: Oh my God! Nooooooobody cares. Not even the dog.

THYLO: I'm not a dog! I'm a Thylacine. I'm not even remotely related to a dog!

ME: Really? You kind of look like a dog, though?

THYLO: I'm just a good example of convergent evolution, like a dolphin and a shark. Robert, I think you're more closely related to a dog than I am.

PASSENGER PIGEONS: Why are you making this Michael Bay painting. Nobody likes those movies.

ME: A lot of people like those movies. But this painting is a commission.

PASSENGER PIGEONS: This isn't original. You're not original!

ME: Hmm, birds and mountains and beautiful women are probably the most common subjects for artists. But you wouldn't say I'm unoriginal if I painted birds, mountains or women.

ME: Michelangelo didn't write the Bible. Botticelli didn't invent Pagan mythology. Artists have always just been some kind of illustrator or decorator.

PASSENGER PIGEONS: False, false, FALSE! Have you ever read a book about art history before.

ME: I've read many books about-

ME: I really hate those pigeons, Thylo. 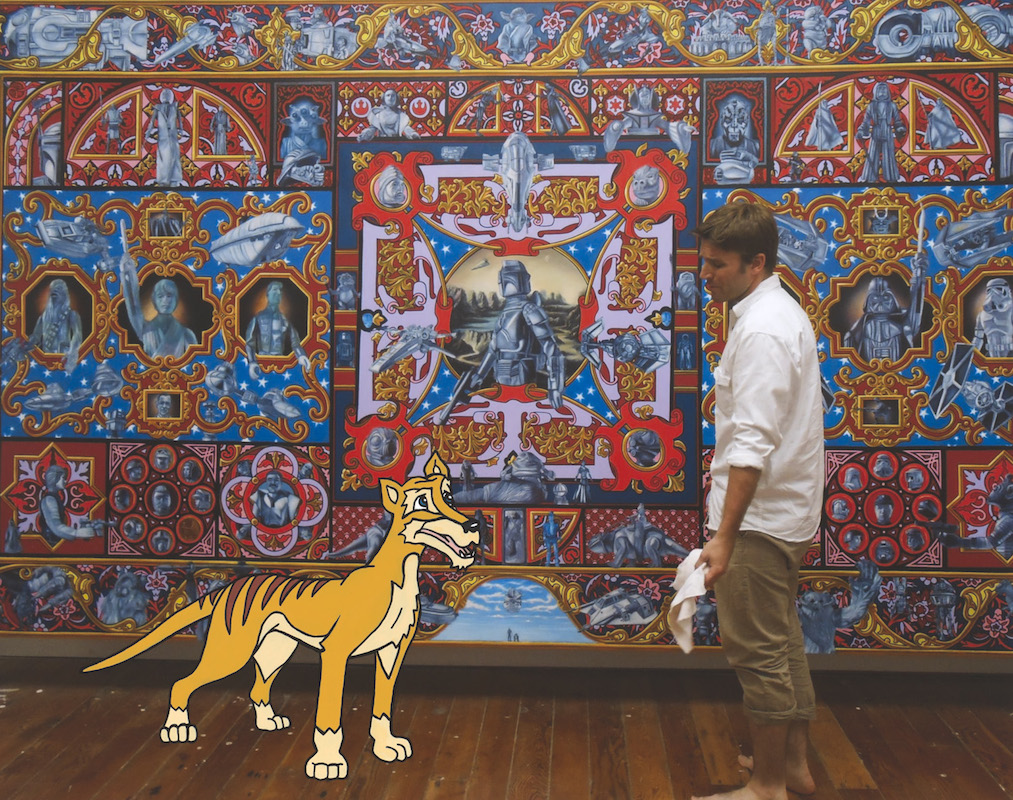 Everything Will Be Okay

ME: Just a little deflated.

ME: I saw some terrible things that were written about my work. It was kind of depressing.

ME: The harder I work the thinner my skin gets. It's just become so hard, Thylo.

ME: Some say you don't choose art, art chooses you.

THYLO: Sure. Fine. Whatever. But don't you remember what Jimmy Dugan said in A League of Their Own?

ME: There's no crying in baseball?

THYLO: No, the other quote.

ME: Avoid the clap?

THYLO: No Robert, he said it's supposed to be hard. If it wasn't hard then everyone would do it. The hard is what makes it great.

ME: Now enough of this insecure, narcissistic whining. Get back to work. 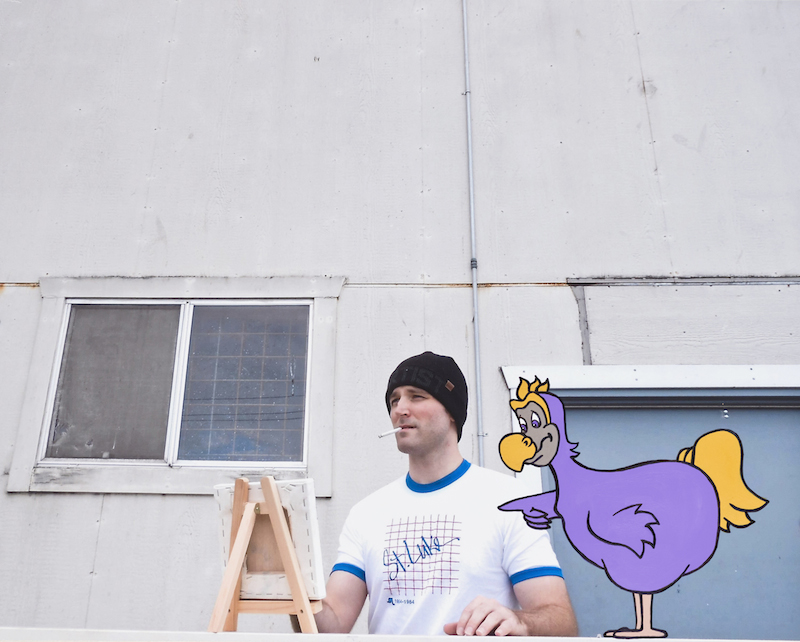 DODO: Hey Robert. What are you doing out here?

ME: Just taking a break. Doing a bit of plein-air painting.

DODO: Well what are you looking at?

DODO: What in God's name are you blabbering on about? Are you painting a meadow?

Me: No, I'm painting a tree that has chickens growing on it.

DODO: Why does the tree have chickens growing on it.

ME: Because it's a poultry.